Skip to content
Previous Next
Why Do Schools Have Playgrounds?

Why Do Schools Have Playgrounds?

If I asked you to think back to your time at primary school, you may remember that great teacher, or a certain lesson that inspired you. I bet you also think about the time you spent in the playground, making friends, falling out and learning how to make games and relationships work.

It’s hard to imagine that in the not so distant past, playgrounds were non-existent in schools. Instead school was a place for structured lessons and nothing more.

School playgrounds as we know them, were pioneered by Friedrich Froebel.

Living in Germany, Froebel first started teaching in 1805, where he joined the Pestalozzian Franfurt Model School. The school’s founder respected children’s individual dignity and believed children had a natural desire to learn.

He believed that this could be encouraged through their natural curiosity and desire for exploration.

The ethos of the school had a profound effect on Froebel, leading him to publish The Education Of Man in 1825 in which he argued that play was a necessary part of educating the ‘whole’ child.

Whilst many people at the time viewed play as a form of idleness that bordered on disorder, Froebel claimed that “Play is the highest expression of human development in childhood” and that the focus of educators should shift to teaching young children through play.

He went on to establish the idea of playgrounds that were built adjoining schools, where children could play freely. He believed that allowing children to play together in a supervised setting would help them to develop social skills such as taking turns, agreeing on common laws, and following rules.

As the idea gained popularity, more and more schools created outdoor spaces with the specific aim of allowing children to play in order to learn.

Froebel meanwhile, went on to also pioneer educational settings for younger children, which he named ‘Childs Garden’ or Kindergarten. He championed outdoor activity in learning and designed popular developmental toys such as shaped wooden blocks.

Without his work and influence it could have taken much longer for the importance of play as a learning tool to be recognised. Today playgrounds are seen as a necessity, both for child development and education, as well as in the battle against modern problems such as childhood obesity. 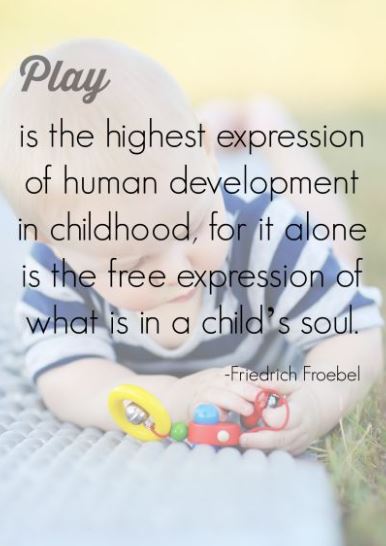 We hope you’ve enjoyed this post, but if you would like to discuss playgrounds and safety surfacing with our team, just get in touch!